Jerusalem, 17/08/2017 – The administration of Makassed Islamic Charitable Society Hospital inaugurated a new Kidney Dialysis Unit, which was set up and furnished with state of the art specialized equipment thanks to a generous donation from Mr. Bader Abdullah Kaloti. The unit has been equipped with two advanced Reverse Osmosis (RO) devices, in addition to a

Dr. Abu Libdeh stated that the aim of providing the Hospital with this unit is to meet the needs of its patients requiring dialysis sessions, in cases of acute or chronic renal failure, noting that the administration of Makassed was able to successfully recruit Dr. Borini, as part of the continuous development of the Hospital’s human and technical efficiency.

Dr. Abu Libdeh expressed his appreciation of Mr. Kaloti’s philanthropic initiative to establish and fully equip the kidney dialysis unit, praising his commitment to the city of Jerusalem and its national institutions. He also thanked all of Makassed’s benefactors for their generous donations and called for further support of the Hospital’s steadfastness in the face of its great challenges.

Dr. Borini, Head of the Nephrology Division at Makassed, pointed out that the establishment of the Kidney Dialysis Unit constitutes a qualitative addition to the Hospital, thus fulfilling its urgent need and saving patients whose lives were sometimes endangered while being transported to other hospitals for treatment, in addition to meeting the needs of the critical cases requiring immediate dialysis.

Dr. Borini added: “We conducted 55 sessions in two months, including some chronic and incurable kidney disease cases… We are also seeking to further develop the unit so as to be able to perform kidney biopsies useful in the diagnosis of kidney disease, examining them through microscopy or immunomicroscopy by using immunostaining.

As part of the renovation and expansion plan implemented by Makassed’s administration with the support of several individuals and institutions, the Hospital also inaugurated a new wing in the departments of surgery and internal medicine, including new rooms and offices funded by Jerusalem businessman Samir Aweidah. 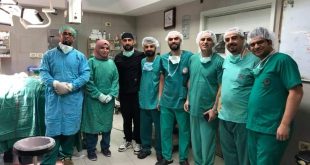